I still plan on writing about this some on my travel/adventure blog at a later date, but I’m such a fangirl I can’t wait that long.

This past Friday, 7 October, was amazing!  Actually, there was a lot of bad stuff that happened, too, but it’ll forever be remembered as a great day.  I’m sorry, whatever else happens in my life, but I met Alton Brown! 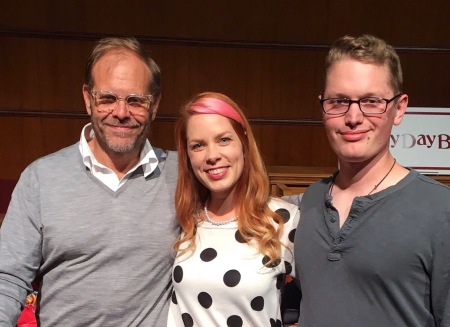 I may have mentioned before, but I couldn’t cook before I got married.  My mum wasn’t a bad cook or anything, but I stayed clear of the kitchen; cooking just didn’t interest me at all.  (Now baking — that’s another thing.)  Hubby’s family loved to cook, and Food Network often played on their TV.

A little funny side story: when Hubby and I first got together, I asked what his favourite TV show was.  I’ve always been obsessed with science fiction (especially Star Trek) or other script-based fiction shows, and was hoping to hear him answer with something I loved so this fangirl could let go and express herself.  His answer?  “Good Eats.”  Keeping in mind that I hadn’t had cable since I was six, my thought was, OMG, his favourite show is a cooking show?  How boring is this guy?  I didn’t even know how to respond.  After watching my first episode, though, I completely understood.

Long story short, it’s pretty much all due to Hubby and Alton Brown that I can cook now (despite most of the time still disliking to do so).

It was really great to get to meet him at the signing of his new cookbook in Kansas City, even though the moment seemed to come and go so fast after hours of waiting, and I hardly remember a word he said directly to us.  I know when we first walked up, he thanked us for coming and waiting out the line (there were at least 800 people in front of us, no exaggeration).  Hubby responded with something like, “hey, I’m doing this for her.”  Mr. Brown looked up at him and said, “good answer!”  (The only thing I remember distinctly.)  I watched him write our names in the book, hoping he’d ask about the pronunciation of my name (I had this whole humorous answer planned out), and he talked some more.  He even put his hand on my shoulder and spoke directly to me for a moment, but I don’t remember a word he said.  Then, we posed for a picture on Hubby’s phone (the guy holding his phone took pics the whole time, though), and then it was over.

Have you ever met a celebrity (at any level of fame), and it turns out they’re a bit of a jerk?  Or you’re at least disappointed by meeting them in some way?  I have, but not this time.  Even after signing books for and interacting with over 800 people, he was still lively, funny, and friendly — just as you’d expect Alton Brown to be.

A big thanks to Alton Brown, his team, and everyone at Rainy Day Books for making this happen.  I’m so thankful.  And cooking like crazy 😁.