The Great American Eclipse is coming up in August next year (2017).  It’s the first total solar eclipse to touch only the United States in its entire 240-year history as an independent nation.  (First “Brexit,” anyone?  No?  OK…)

I’d had eclipse glasses in my Amazon wish list for at least a year before I finally purchased them shortly after moving to my current house.  They’ve been sitting in a safe place for the last few months, but I finally decided to try them out recently.

I get creeped out pretty easily with seeing normal things differently in real life.  My first dream job was to be an astronaut so I could go to the moon, but one night when I was about six I saw the moon look giant in the sky and it scared me out of being an astronaut.  (I still have no idea why it appeared to be giant, because all of the usual explanations don’t apply.  It was high in the sky, white, and nearly a week past full.)  So in my back yard, right before I put on the glasses, I braced myself for what I was about to see.

Nothing.  Completely black everywhere.  No reflections, no sunlight, no anything.  The ONLY thing that was shown through the glasses was the surface of the sun itself.

There it was in the midst of its pitch black surroundings: a flawless, goldenrod, perfect circle.  I even tried taking a picture of it with my phone through the glasses, but the phone’s camera kept insisting that there had to be white somewhere and tried to colour balance.  (Although, it does say right on the glasses that they’re only to be used with eyes, not “cameras, telescopes or binoculars.”)

But I stared at that circle.  That apparent little thing in the sky is the giant powerhouse of the solar system.  Just past aphelion, it was about 152 million kilometres (94.5 million miles) away from me.  From the moment “sunlight” is created in its core, it takes hundreds of thousands of years for it to reach the surface of the sun, then just under 8.5 minutes from there to here.  It’s the source of the horrible heat I was feeling to my core (amplified by the day’s 61% humidity), and of all the life in the solar system.  While it looked like a completely calm and perfect circle in the sky, it’s raging with fission and plasma inside and out, and could easily wipe out life on earth if it really wanted to.  (Though hopefully that doesn’t happen until its scheduled time in about 5 billion years.)

It didn’t make me feel small.  I just took a moment to see the sun for what it is.

I just want to encourage you to go out and “smell the roses” today.  Stop and find something to appreciate, scientifically or otherwise.  Find something you take for granted or overlook every day, and just take a moment to appreciate it for what it is.  The feel of a leaf, the formation of a cloud, your own heartbeat.  Everything has its beauty.

Today, I’m participating in a fundraiser event for The Mars Generation.  The participants in the event are basically “stranded on Mars,” and have to ration ten medium-sized potatoes and sixteen ounces of water for the twenty-four-hour period.  (The whole thing can totally be done during one’s daily routine, and you don’t have to follow it.)  The participation takes place on Twitter, where we Martians not only help spread the word to raise money, but can also earn more perks like ketchup, coffee, and more water.

Check out info on the event with the hashtag #PotatoChallenge on Twitter, and at the following webpages:

Now that that important passion is mentioned, onto the fandom stuff. 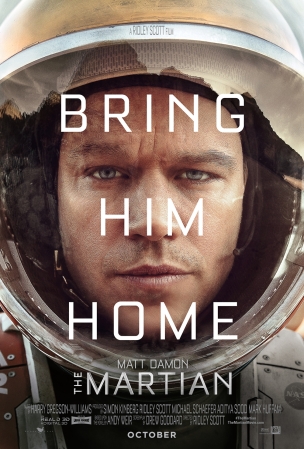 If you haven’t seen The Martian yet, WHAT ARE YOU WAITING FOR?!  IT’S AWESOME!

I’ve seen the movie twice, and am currently reading the book.  Still “currently” because toward the end of the book I’m reading as little as possible — I don’t want it to end!

Though I don’t know any differently, I think Matt Damon was perfect for the part of movie Mark Watney.  To keep this post from getting too long, I’ll just let you figure it out for yourself.  Although, I’m sure that it also mostly has to do with my new fandom obsession with Matt Damon as an actor.  I watched The Monuments Men yesterday with Hubby.  It was a great movie with an all-star cast, including Matt Damon.

Right now, I’m sitting at Starbucks doing homework.  I’ve made some good progress on it, but now I want to take a break to watch a movie.  The Bourne Identity, to be specific.  The internet connection here isn’t having it.  Boo.  I’ve only seen the trilogy once, after seeing The Bourne Legacy several times, because of the fandom obsession both Hubby and I had over Jeremy Renner in 2012.  Actually, it was the exact same situation with the Mission Impossible series of movies, haha.  I only saw the trilogy once after a lot of Ghost Protocol views.

Anyway, I guess Jason Bourne will have to wait until I get back home.  Until then, I’ll make some more headway in astronomy class, eat potatoes, post to Twitter, and listen to the Christmas music playing in Starbucks.

I’ve always loved to look into the positions of planets, constellations, and other astronomical bodies during certain times and events in history.  When I was 15, I even did a time-lapse representation of how far the planets had actually travelled during my lifetime.

Nowadays, I love to use apps on my iPad. (My favourite is Sky Guide, but the images in this post are from SkyView. Both are linked at the bottom.)  There’s so much info available at our fingertips it’s amazing!  I don’t know if it had been just added, but I didn’t discover until about a month ago that you can set the date and time in the SkyView app!  My first instinct, of course, was to see how the sky looked the moment I was born, from the place I was born.  I found enough irony and coincidence that I wanted to share.

Let me take you back to December of 19*cough cough*, at 0653 local time.  The sun’s threatening to rise as this girl makes her grand entrance, surprising a couple of new parents with the fact that all the blue things they’d bought for me would have to do 😋.

(Note: The red line is the horizon.) Saturn, my favourite extra-terrestrial planet in our solar system, has arrived just in time to welcome me, seemingly holding the hand of her curious little brother Mercury.  Scorpius, my favourite zodiacal constellation (though not my “sign”), is also making it to the party.  Uranus and Neptune trail close behind; “fashionably late” to make sure they don’t arrive too soon, thus avoiding awkward small talk.  Obviously, the masters of their introversion. Betelgeuse and Orion have barely escaped my arrival as they set.  I guess The Hunter knew I’d be a vegan one day 😄😜. 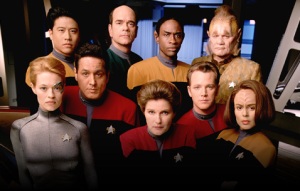 This question came up in a Star Trek: Voyager forum of which I’ve been a part nearly since it opened in 2007.  The most recent poster had mentioned that because she didn’t watch or read as much Star Trek as she once had, she felt like she was losing her fandom and letting the franchise down.  I decided my response was worth sharing here.

I also sometimes feel as if I’m letting the franchise down.  It’s not that I don’t like Star Trek anymore… I’m just an adult with more –dare I say it– important things to do.  And there’s so much more of which to be a fan, too.  Stuff that’s happening now instead of re-watching shows that ended eight or more years ago (and which we’ve seen eight or more times, haha).  Once I got into the new Doctor Who it slowly started to outshine Star Trek as a main definition of my geekiness.  It took a few years, but I finally realised it sometime recently.

Yes, I do still admire Star Trek as a part of who I am (even right now I’m drinking out of a Star Trek tumbler I was given for Christmas).  I would even consider Star Trek as the foundation of my geekiness.

–Star Trek is where my story writing ability really improved.  Even though, for personal reasons, I’m not allowed to write fictional stories anymore, I wouldn’t be as well off to be able to write for blogs and newsletters without it.

–I’ve learned a lot of my favourite “fancy” words from science fiction.  Most of them were from Star Trek, but one was from Stargate Atlantis.  If it hadn’t been for seeing Robert Picardo in an episode of Stargate SG-1 I would never have started watching Stargate Atlantis!

–Star Trek got me interested in science fiction, which is a huge part of my life whether I watch it, read it, write about it, talk about it, make music videos about it, or… I just exist :o).

So, no, I may not watch it very often or even think a lot about it anymore, but it still flows through my blood, empowering the geek I am to do whatever it is that I do best.  Whether it’s what I enjoy, what I do, who I befriend, or just being a geek and watching every season of some show in a week, I know that it’s all thanks to Star Trek.

But even the foundation needs a bit of maintenance every now and then :o).