The first time I finally went to the Renaissance Festival, it was magical!  We attended every weekend and most of the extra festivities that happened on Saturday evenings at an extra cost.  (If we’d known we’d go more than the first weekend, we’d have saved so much money by buying season passes.)  I bought a beautiful renaissance dress the second weekend.  (Which I later wish I had done a bit differently.  After last year’s purchase, I’m finally satisfied with that outfit.)

One of those nights was a masquerade ball.  The four of us who went had fun shopping for masks.  We were all Whovians, especially the two of us girls.  Before we entered the castle, still taking pictures outside, I saw a man walk by who was dressed as the Doctor.  David Tennant’s Doctor, to be specific.  I pointed it out to my friend, and we were both too excited.

The following poem is based on that night.  It’s the true story up to the asterisk (*), then my imagination took over. 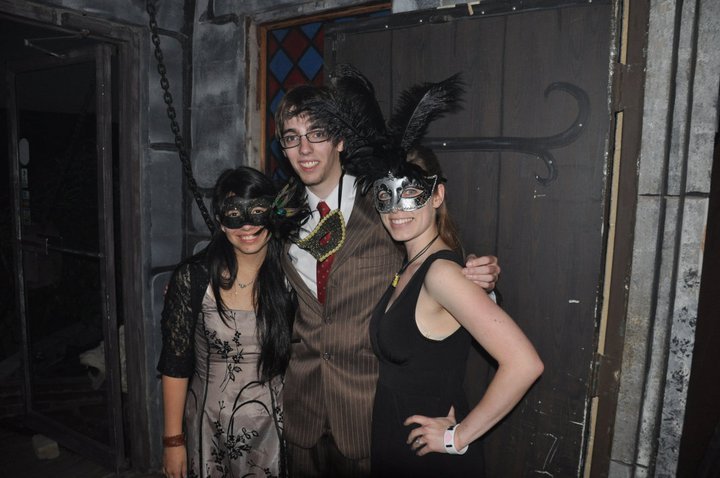 My Night With the Doctor

‘Twas two thousand eleven
at a Renaissance Faire.
The four of us dressed for the occasion
and did up our hair.

That night, there was a Masquerade Ball.
Everyone looked so neat.
We passed a man in a striped brown suit
and white Chucks on his feet.

My friend and I looked at each other in shock.
Could this be true?
Had we just seen the Doctor
with the TARDIS so blue?

As our men stopped to take pictures
of gargoyles and such,
she and I looked for the man
who saves the world with his touch.

“There he is! There he is!”
I excitedly whispered to her.
He was talking to another man
and we didn’t want to be a bother.

We finally headed back inside the castle.
We followed the Doctor closely behind.
When we caught up we said hello
and asked for a picture, if he didn’t mind.

She asked if he was with someone,
but he said he came alone.
It sounded like he’d just lost a friend
when he spoke with that tone.

We were too nervous and excited
to say more than “thank you” and “good-bye.”
But as the night went on,
we wanted to say another “hi.”

As he stood by himself,
on the other side of the room,
we decided we wanted to dance with him
and wanted to soon!

The men who were with us
were fine with it all.
So she finally got up the nerve
and walked across the hall. *

The Doctor accepted her invitation
and they began to waltz.
Not long after they start dancing
the music halts.

Another song began to play,
so they danced again.
I watched in anticipation for my turn;
the excitement hard to contain.

I walked over as the song came to an end.
The band waited for the conductor.
I couldn’t believe it was my turn
to dance with the Doctor.

At first, I was nervous
and stepped out of place,
but he reassured me
and encouraged my grace.

He swept me off my feet.
I utterly adore him.
Now I understand why
his companions fall for him.

I was having a fantastic time.
The music ended far too soon.
I planted a kiss on his cheek,
as it was very opportune.

Before he left, he asked our names.
We answered, “Sasha and Kuri.”
He said they were lovely and waved good-bye,
then a tear made my eyes grow blurry.

At the end of the Ball
there were fireworks outside.
We all chose the back of the crowd
at which to reside.

The show was brilliant,
and just before it ended
we noticed a blue box in the sky,
the man inside contented.

He waved us a farewell;
a new adventure to ensue.
This was my amazing night
with the wonderful Doctor Who.

Sadly, at the same time that Sasha (name changed, as usual) started toward the Doctor to ask him to dance, he left the building. We looked for him all night, but couldn’t find him :( . Him just being there still made our night, especially since that was the first time I’d seen Doctor Who cosplay in person. At the time, the show was barely entering main-stream-geek level in America.

I spoke with some other Whovian friends about it soon after, and they suggested that the Doctor seemed a bit off/sad because it was him right after he’d lost Rose :'( .  It’s so sad, but I’ve forever accepted that explanation.